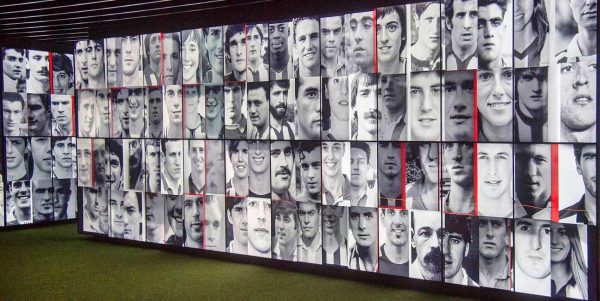 Discover the Athletic Museum with us, the place that a team like Athletic Cub deserves and that has put together the history of a century-old club since its inception.

Since the opening of the new Athletic Museum in August 2017, the number of visitors has kept on growing. And it is with good reason! It is a place that would leave the fan of any team speechless. Not only because you can learn about the history of a a century-old team, but also because it contains all kinds of valuable objects. When we say that the most valuable objects are kept there, we are referring to oldest shirts and the one and only “Copa de la Coronación” trophy. If you want to understand the grandeur of a team like this you only have to visit the Athletic Museum and let yourself go.

What you can see at the Athletic Museum

There are many things to see in the Athletic Club Museum, a large space with a decor and ambience that takes you to any match day.

The ambience of the Athletic Museum

The red-and-white colours, the dim lighting, the roar of the lions, the stories and the rumbling of the hymn are some of the many things that take place in this museum and that give you goose bumps. In this place, which has been thought through to the tiniest detail, every object you see will impress and excite you even more.

The painting by Lola Flores

One of the characteristic things about the Athletic Museum is the amount of material it holds telling the story of a team like this. Not only are there very old objects or photographs, but you can also see snippets of old matches, Athletic Club kits, objects from the industrial era that Bilbao experienced, and even a painting by Lola Flores featuring a women’s team.

The lion in the Athletic Museum

In fact, one of the most striking objects is the lion. It is a gift from the former chairman of Deportivo Alavés, Juan Arregui Garay, who promised Athletic Club that if it won the Copa del Rey he would give it a lion. In 1984, Arregui kept his promise. If you do not know why Athletic Club players are called lions, you can find out on our blog.