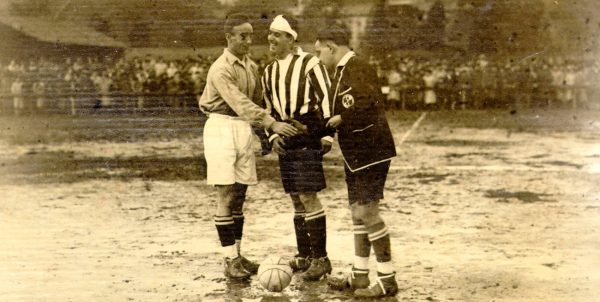 La Campa de los Ingleses in Bilbao is a historical place, a seed of the passion for football in the Biscayan capital and the origin of the famous Athletic Club.

So, this old place, which nowadays gives its name to more than one spot in the city, merits a few words to tell its story.

What is La Campa de los Ingleses” in Bilbao and where is it?

When we talk about La Campa de los Ingleses in Bilbao we may be referring to three different locations: the old quay, the current park or the tavern at the San Mames stadium. Let's explore each of them.

This area dates back to the 17th century and ran long the left bank of the Estuary of Bilbao until 1908, part of the area now known as Abandoibarra. At that time, this area was a British cemetery and had various uses as a runway and a football pitch, among others. It was sport, however, that was responsible for its name (the name it was given), which has lasted until today and, therefore, has an incalculable historical value. The English sailors who came to Bilbao in MacAndrews boats played football on that compound, which until then was a practice unknown to the people of Bilbao. Today, there is a commemorative plaque in this place to remember that it was precisely there that the passion for football and Athletic Club blossomed in Bilbao.

Today, this space looks quite different to how it was at that time. The La Campa de los Ingleses park occupies about 25,000 square metres today, the work of the landscape gardener Diana Balmori. It is a green area between the area around the Guggenheim Museum Bilbao and Deusto Bridge, which in turn houses other emblematic places that are more typical of our times, such as the Iberdrola Tower and the Library of the University of Deusto.

The last place is La Campa de los Ingleses tavern, the San Mamés gastronomic tavern located on the first floor of the stadium. As you might imagine, it takes its name from the place that we were just talking about, the first spot in which a football match was played in Biscay, La Campa de los Ingleses quay. Today, this spot brings together history and tradition in a new tavern concept at the very heart of football for the people of Bilbao. It is the perfect place to celebrate Athletic’s victories and is also open every day of the week, except on match days. In short, it is a tavern with exceptional heart and soul that you cannot miss if you have heard stories and legends like the ones above about La Campa de los Ingleses.

What you should not miss on your visit to Bilbao