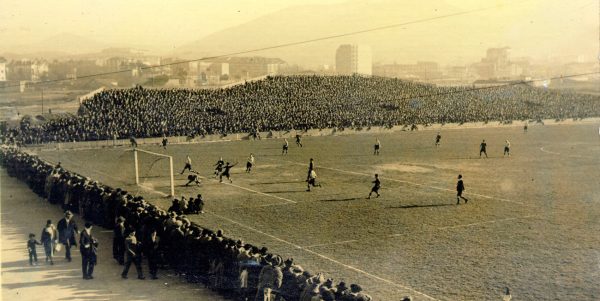 The first football pitches in Bilbao

We will run through the main points where football had an impact in Bilbao and Biscay.

There is a lot of talk about the football stadium, the San Mamés Arch and the latest architectural landmark that has turned the new site into a great stadium. However, many people are not aware of the first football pitches in Biscay and they too deserve their brief but intense prominence. All indications are that the first time that football was played in Biscay was on the right bank of the Nervion near its mouth, but we do not know exactly where. Let's take a look at the first football pitches.

Which were the first football pitches in Biscay? Any work on the history of Athletic immediately alludes to the Lamiako pitch as a meeting point for the first football fans in the province. Due to its characteristics, Lamiako can be considered as the first pitch prepared with regulatory conditions and splendid turf in Biscay and probably in Spain. The first written records of using the Lamiako pitch to play football date back to 1892, when the members of Club Athleta of the Nervion shipyard set their sights on land which, until then, had been a racecourse. On October 27, 1892, they requested permission to play the oldest match on record in Biscay. Permission was granted to play exclusively “on Saturday afternoons and holidays.” In this way, the Lamiako racetrack became Lamiako football pitch, terrain which was involuntarily adapted, as its fate to that point had been different. Over time and faced with the large number of people who went to watch the games, the trains, knowing that there were travellers going to matches in Lamiako, ended up making scheduled stops next to the ground on match days. The first football lovers in Biscay, many of them members of those families from Bilbao who spent their summers in Las Arenas and others who used to go there, found the closest thing to a football pitch in Lamiako as the ones they had seen in England.

Some books also mention the Santa Eufemia meadow as one of the first places where football was played. This is an area close to the residential area of Las Arenas, but sufficiently set apart from the town. Apparently, those who would later become the members and founders of Bilbao FC located the pitch where they could play football occasionally without asking anyone's permission, because it was the closest site to their homes where they could play without further preparation. This place is often mentioned and remembered because many of the founders of Bilbao FC were linked very directly to Athletic Club years later.

Another place that is often cited as one of the first places where football was played in Biscay is the Union CF pitch, created in 1901. The pitch was located in a hollow near the road to Asua, in an area among the pine trees at the end of the Zugatzarte straight, just before starting the climb up towards Neguri. As was the case at Lamiako, the players jumped off the moving train as they reached the area surrounding the pitch. Looking at it on a map, it was at the site that is now taken up by the offices of Ingeniería Sener. In short, the new Las Arenas residential area and its surroundings had the right elements to start to play football there. The terrain, young people from well-to-do families, some of whom had been sent to England to study, holidays and free time to give to those balls which those who had studied abroad had brought back with them. However, it should be made clear that Santa Eufemia and Zugatzarte were totally unofficial grounds and cannot be considered football pitches. When they wanted to play football in a more orthodox way, Lamiako was the place.

What a visit to San Mames includes

Places for meetings in Bilbao