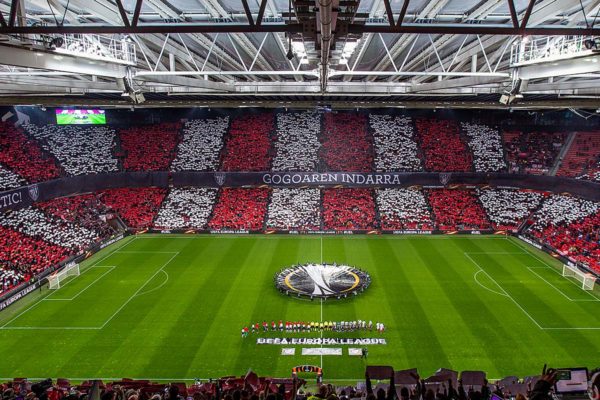 Football in its purest form: that is San Mames

If something can be felt in the San Mames stadium in Bilbao, home of the red-and-white team , it is football in its purest form. Watching how a match is contested in San Mames is something unusual that is worthwhile and that you cannot miss for five reasons.

5 reasons why San Mames is football in its purest form

1. The history of its team

Athletic Club is a team with a history and not just any history either. It was founded in 1898 and since then it is one of only three clubs that have spent every season in the Spanish First Division and have never been relegated to the Second Division.

Its founding is also linked to the history of Bilbao, specifically the industrial era, the time when the English brought the new sport that the people of Bilbao and Biscay soon took to.

Another reason why San Mames is football in its purest form is its century-old philosophy, with over 110 years of history. Only players who are born or received their football training in the Basque Country can be part of the team.

In fact, recently, one of the most prestigious American newspapers, The New York Times praised the philosophy of Athletic Club. They talked about the globalisation of football, how many clubs want to be known all over the world, while others remain faithful to their history, like the red-and-whites.

A stadium with history that takes its name from a saint, Mames (Mammes) and which led to its players being known as “Los Leones” (the Lions) and the stadium as "the Cathedral of football". But why the San Mames stadium is called that or why the Athletic players have the nickname "the Lions" is another story.

It is one of the most impressive buildings in Bilbao, along with the Guggenheim Museum and the Iberdrola Tower, among others. That may be the reason why , among others, that the stadium has been selected by UEFA as a venue in Spain for the 2020 European Championship.

With a capacity of 53,000 spectators, San Mames has all of the amenities and has become a leading stadium in Europe. The stadium has different areas, such as meeting rooms, conference rooms, event rooms, a restaurant and a tavern.

Public pressure and the great atmosphere on match days are one of the hallmarks of this stadium which you cannot miss.

The red-and-white supporters are the most fervent in the world according to the magazine So Foot. They are characterised by being very devoted; they suffer with the team and their passion is felt at all matches.

Wherever Athletic Club goes, their supporters also go, like a red and white tide capable of reaching any corner of the world, singing the Athletic anthem.

On match days, the streets of Bilbao are also full of supporters, the balconies are dressed in the Athletic flag and the atmosphere is truly unique.

In addition to being ranked third in La Liga in terms of the most titles, the San Mames football stadium has already received several awards.

Firstly, it was listed by UEFA as Category 4, as the San Mames stadium is a major milestone in the construction of large sporting facilities in the world, one of the benchmarks nationally and internationally.

But the awards do not end there. The last major award it received was the best sports building in the world.

On that occasion, the architecture of the San Mames stadium beat other buildings that were in the final phase of the Sport - Completed Buildings category. The others included the "London Aquatics Centre" in London, "Fisht Olympic Stadium" in Sochi and the "Margaret Court Arena" in Melbourne.