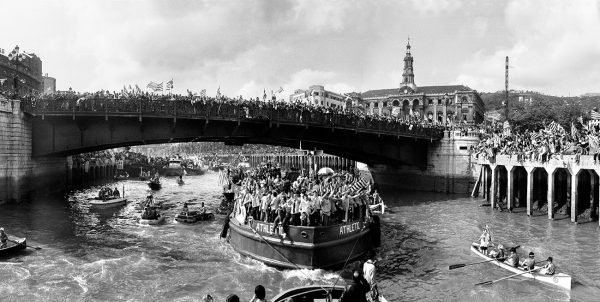 Athletic Club has its “cathedral” (San Mames Stadium), its colours (red and white), its “lions” (its players), and also its Gabarra (a river barge). It is its own special and distinctive way of celebrating its titles with its fans

Other teams celebrate their victories with an open-top bus ride. Athletic Club, however, does so by sailing up the river estuary, the Ría de Bilbao, on its Gabarra, a river barge full of history.

It all started back in 1983, when Athletic Club was crowned league champion for the seventh time. Twenty-seven years had gone by since the club had last won that title, and 10 years without any kind of trophy.

Bizkaia was going through a sad, depressing time, fully immersed in the reconversion of its industry, and with a high rate of unemployment. Yet Athletic Club managed to reward its fans with a victory that would put a smile on their faces.

One of the club’s directors, Cecilio Gerrikabeitia, who had already witnessed many of Athletic Club’s triumphs, thought that on this occasion the traditional appearance on the balcony at City Hall would not be enough.

He was listening to a song when he came up with an idea that would make history, and for many would remain ingrained in their memories or in their deepest desires. The lyrics say: “Down the Nervión River, sailed a barge, rumba la rum…”.

Barges were once an essential type of vessel for local industry. They are a kind of flat-bottomed boat without an engine that needs to be towed, being used for carrying iron-ore.

So in 1983 a barge was rechristened Athletic, but it would no longer carry iron-ore, as instead it would become the guest of honour when Athletic celebrated winning another title.

The history of La Gabarra

Over a million people lined the banks of the Nervión in 1983 to celebrate the title. The voyage lasted three hours (from Las Arenas at the mouth of the estuary up to City hall in the heart of Bilbao) which would remain fixed in the memory of players and fans alike, being repeated the following year when the club retained the title. Indeed, Athletic Club did the double in the 1983-84 season, which began with the catastrophic floods that ravaged Bilbao.

This tradition, which has only been held twice in Athletic Club’s history, has had such a profound impact that the fans are longing to see the barge sail up the river once again and bathe it in red and white.

Nevertheless, La Gabarra did not remain idle, as it was used as an essential instrument of work in the port for the transport of cargoes, the repair of quaysides and the deployment of buoys, although since 2013 it is now to be found at the Bilbao Maritime Museum.