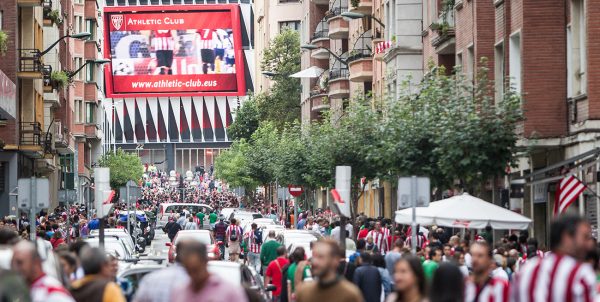 International events in Bilbao are steadily increasing, capturing the interest of the whole world.

In fact, in 2017 Bilbao is putting together a cultural offer with more than 100 initiatives, festivals and programmes spread across all of its sites. In this article, you will find out about the international events in Bilbao with the greatest impact and visibility, events that you cannot miss.

International dates and events in Bilbao that you cannot miss

The pop and rock music festival is held annually in July in Bilbao. It is one of the most important and renowned festivals both at a national and European level.

The International Short and Documentary Film Festival that takes place every year in Bilbao.

The international music festival which is held annually in Bilbao at the Euskalduna Conference Centre. Its hallmark is its thematic character; at each of its editions, the performances focus on an era, style or particular composer.

International meeting and one of Bilbao's most renowned international events. It is a benchmark for the video gaming industry. Over several days, there are workshops, where studios, developers, investors and fans of this world come to the meeting to learn about the latest developments and encourage the development of new projects.

The San Mamés football stadium has brought together thousands of fans and followers of great rock bands. Groups such as AC/DC, the Rolling Stones and Guns N' Roses, the latest band to début with great success at San Mamés, have played in this emblematic place. El Sol Ibero-American Advertising Festival The city of Bilbao has been awarding prizes to the best adverts at the “El Sol” Ibero-American Festival of Advertising Communication for many years.

Bilbao Manga and Japanese Culture Fair, which takes place at the Euskalduna Conference Centre. Over the last three years, the culture and traditions of Japan have come to Bilbao through a comprehensive and entertaining programme that includes more than a hundred activities.

Conference on Equality, Diversity and Inclusion.

In 2018, Bilbao will become the venue for the Conference on Equality, Diversity and Inclusion, the most important in Europe on this issue.

And lastly, another of the upcoming international events in Bilbao. Bilbao will be one of the 13 venues of the 2020 European Championship. Where better? The San Mamés Stadium will host three matches in the group stage, as well as one of the round of sixteen matches in the top European competition. In addition, all of these high impact international events take place in unique historical locations in Bilbao, which are tourist attractions and host other events of interest that you also cannot miss.

Places where international events are held in Bilbao

San Mames BAT: an area for events and conferences in Bilbao