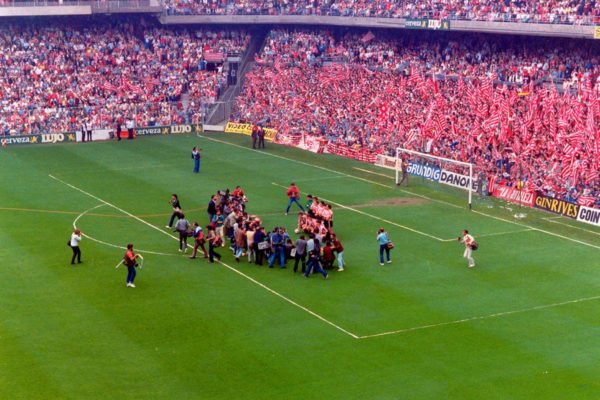 Where does the nickname “the Lions” for Athletic Club players come from?

If you have ever wondered why Athletic Club players are called “ the Lions”, wonder no more.

To answer why the nickname "the Lions" was used, we have to go back to Turkey in the 3rd century, when San Mames (Saint Mammes) lived.

After him came the story, which explains that, when he was still very young, after a lot of torture, Mammes managed to escape to the mountain, where he lived for three years.

There he befriended wild beasts and animals, reading the life of Jesus to them. After a time he was arrested again and, after undergoing more torture, he was sent to the circus with the sole intention of releasing the lions and waiting for him to be devoured. Something that never happened because, having been tamed by Mames, the lions ended up prostrate at his feet.

The governor of Caesarea in Cappadocia became enraged and ordered the end of the youngster’s life, stabbing him in the abdomen with a trident.

Following this story, Mammes would become a saint revered by the whole world, including in the city of Bilbao. The asylum and the hermitage that were near the San Mames stadium were dedicated to him.

As expected, the stadium would also end up bearing the saint's name, which is why San Mames is called just that.

Athletic and the name of the stadium, like the saint of Caesarea, are also represented by a lion. Athletic's game has been characterised throughout its 110 year history above all by its bite, fight and never giving matches up as lost.

And bringing together the characteristics of their game and the story of the saint, since the early 1910s they have been called "the lions of the North" or "the lions of San Mames".

In fact, this nickname is now so entrenched that the players of Bilbao Athletic, the Athletic Club youth team, are known as the "cubs".

Innovation in the construction of the San Mames stadium

San Mames and its architecture: a magnificent stadium