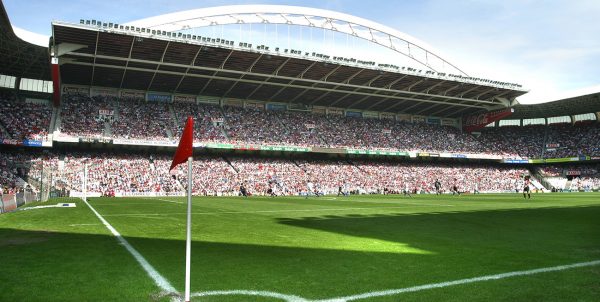 Story of the San Mames arch, an architectural landmark and emblem of Bilbao

The Athletic Club stadium is, without doubt, a place where great personalities have met, full of anecdotes, emblems and icons.

Today we will tell you the story of the San Mames arch, the icon par excellence of Athletic Club's stadium.

The story of the San Mames arch

This story goes back to the end of 1945, the year in which the board bought the land from the Caja de Ahorros Vizcaína near to and adjacent to the stadium, which was opened in 1913.

However, it would be five years until the board presented its expansion project and held an “ideas competition”.

In 1953, he started building the new cantilevered roof of the main stand of San Mames Stadium, the largest in the world and, to make matters worse, made of reinforced concrete.

Despite the fact that the work threw up many problems and peculiarities, it demonstrated the might of local engineering.

An immense arch would be responsible for supporting the cantilevered roof; a key element that went from weighing 480 tonnes to 270 to make it possible to finally put it in place.

This fact did not reduce the risks, but it did end up being another technical display of might, as it was lifted using about twenty straps.

Construction and final installation of the San Mames arch

The arch had to be built in two halves, which were progressively raised while being supported on a spectacular wooden falsework.

Once the arch had been shaped, after welding the two halves, it was finally possible to remove the entire structure that had served as a support. The entire metal framework was then suspended from the arch.

The crucial moment in the story of the San Mames arch

That was the crucial moment. The arch had been joined to the part of the stand closest to the street. It then had to move 14 metres to reach its final position, in the centre of the roof.

Due to the weight and the large size of the whole assembly, every movement had to be precise. The ends of the arch were put on carts with wheels. On a Tuesday the 13th in March (the equivalent of Friday the 13th), the arch and roof were wheeled into their final position.

Any superstitions did not come to fruition; the new main stand was opened in May 1953. It was the first time that this type of arch was used on a sports building, and made it possible for the stadium to have 35,000 additional seats available.

The San Mames arch, an emblem and icon of Bilbao

Its functionality combined with its slender design made the stand and its arch an architectural landmark and icon of the ground, Athletic Club and Bilbao. Something to be proud of for the people of Bilbao, which also crowned its emblematic cathedral. With the construction of the new San Mamés Stadium, the future of the arch came into question. Eventually it was installed in the sporting town of Lezama, where the affiliate club, Bilbao Athletic, the Athletic Club women’s club and the other levels of the club train and play their matches.

The San Mames stand, an icon for Bilbao