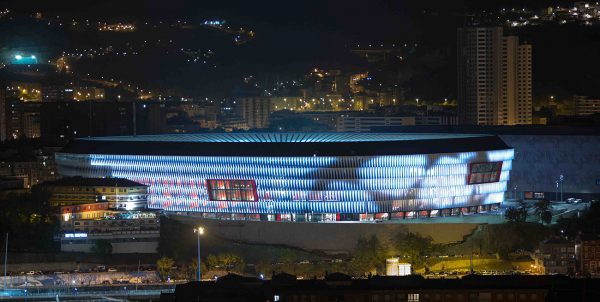 Throughout its history, the San Mamés Stadium has been known as the cathedral of football.

However, since it was first constructed, the possibility of holding other types of non-sporting events in it was already envisaged. That is how this emblematic site in Bilbao has come to host various rock concerts. The techniques nowadays allow us to leave the ground as if no other non-sporting activity has been held. The first music festival took place in June 1978, when the Euskarari Festival was held, which was more like a pro-Basque language campaign than a musical event. Although it had popularised pop and rock at an international level since the 60s, Bilbao was still showing itself to be traditional and conservative. It was not until the mid-70s that the Biscayan capital began to play host to rock groups of some renown. For San Mames, however, there was still some time to go before it “rocked”.

Mick Jagger repaid his debt to San Mames, the Cathedral of Rock.

The first opportunity came with the Rolling Stones. It was one of the events to celebrate the 100th anniversary of Athletic Club. On June 18, 1998 everything was underway, but the indisposition of the singer Mick Jagger led to the cancellation of the performance. It was a blow to many people and many fans in Bilbao. An outstanding debt that would not be paid off until five years later with the Licks World Tour in 2003. That year started what would be the first big concert in San Mames, with tracks such as 'Brown Sugar' and 'Start Me Up', after which Mick Jagger greeted the crowd in Basque: “Gabon Bilbao, azkenik hemen gaude” (“Good evening Bilbao, we’ve finally got here”). On that occasion, San Mames brought together an audience of 36,000 under fireworks and coloured lights. The party had come to San Mamés to stay.

The next time that Rock would be allowed back to San Mames would be with Bruce Springsteen and his band, in July 2009. The band's guitarist, Nils Lofgren, came out with an accordion and sang the classic notes from the popular Bilbao songbook, “Desde Santurce a Bilbao” (From Santurce to Bilbao). After this hugely cheered gesture, Bruce Springsteen leapt onto the stage with a “Kaixo Bilbao, pozik nago” (“Hello Bilbao, I’m happy”).

Rock would soon return to resound around the stadium in Bilbao. One year and two days later, San Mamés once again became the Cathedral of Rock. It was the turn of AC/DC. The 36,000 seats available were sold out in July 2010 to see what was rumoured to be the band’s last concert and which, at the same time, brought the world tour to an end. The fans were finally more than satisfied, this time in the Cathedral of Rock.

On this occasion, the latest big rock concert launched the new San Mamés Stadium as a venue that will continue the tradition of hosting concerts by the best rock bands. This time it was the Californian group, Guns N'Roses, on May 30, 2017. And it didn’t disappoint. The show was as if San Mamés was once more being crowned the Cathedral of Rock, this time with a new stage, but with the same grandeur and perfect event management.

Football in its purest form: that is San Mames

How to buy tickets for the San Mames BAT