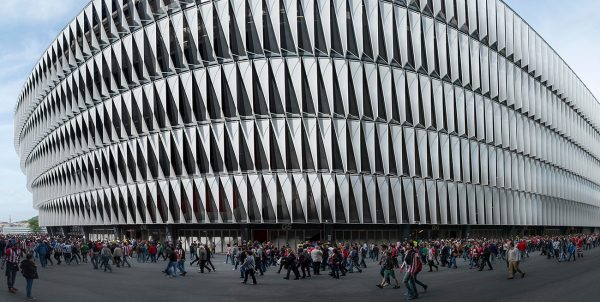 San Mamés has been awarded the UNE 179.003 certificate, making it the pioneering football stadium for safety in Europe.

The certification accredits it as a pioneering football stadium in terms of safety as it is a safe venue for both players and fans. This is very important as the new San Mamés stadium has a capacity for more than 53,000 people.

In fact, Isabel Urrutia, Patient Safety and Quality Coordinator at the Igualatorio Médico Quirúrgico (IMQ), explained how every time the red-and-whites take to the pitch at least one person needs to be treated. Last season, for example, about eighty interventions were reported, almost all of which were minor. Only 16% of patients need to be transferred to hospital. That is why, from the start until the end of a sporting event at San Mamés, nurses, doctors, ambulance drivers and security guards remain at their posts in case they need to be care for or protect someone. The above personnel arrive up to 90 minutes before the match to deal with any possible emergencies in the vicinity of the stadium. And, if that was not enough, about 80 students doing Medical and Nursing degrees at the UPV/EHU also provide their services as students.

Athletic's Safety Committee has entrusted health safety to Igualatorio Médico Quirúrgico (IMQ) for more than 20 years and, based on the evidence, will continue to do so. The stadium underwent an examination between May and June 2017. This evaluation was carried out by a doctor with international experience and the certificate was awarded by DNV-GL. It should not be forgotten that this pioneering stadium in safety is in a privileged location in terms of health: between the Hospital de Basurto and the Clínica de Zorrozaurre. But it also incorporates three ambulances, seven periphery infirmaries, a central infirmary and a UEFA-ranked infirmary, a mechanism that is reinforced for Europa League matches that are considered high risk. The San Mamés health and safety team has also taken courses in cardiac resuscitation and follows protocols that have been previously studied and designed with the World Health Organisation and regulations of other countries as a reference. This is something which is constantly being worked on to ensure fast, efficient assistance. Two effective international methodologies have also been used: FMEA (Failure Mode and Effects Analysis) which helps detect risk factors, and SBAR, a method that was used in American nuclear submarines and which has been adapted at San Mamés for the efficient transmission of messages. San Mamés has always been a source of pride for Athletic fans, which is why it is known as the Cathedral of football. This pride is now strengthened by the fact that it has gained recognition as the best pioneering football stadium in terms of safety and healthcare in Europe.

What a visit to San Mames includes

Places for meetings in Bilbao

Experiences in the San Mames BAT