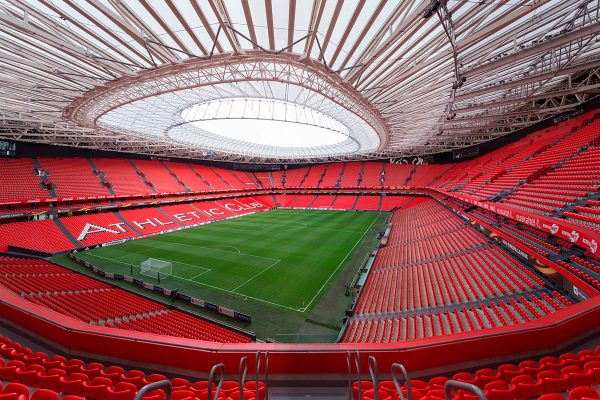 Why is San Mames Stadium called the cathedral of football?

“Bilbao without San Mames would be like Paris without the Eiffel Tower”, said Luis Fernández, a Frenchman, former player, and coach who trained Athletic Club. But why is San Mames called the cathedral of football?

There are several explanations, myths and legends as to why San Mames has been given this moniker. The main reason is that it is simply the name of the place, although it is backed by other opinions that have been widely accepted, contributing to the huge myth surrounding this iconic stadium.

Reasons explaining why San Mames is the cathedral of football

The stadium was given the moniker of “La Catedral” because the fans flocking to the ground said they were going to San Mames, and specifically to the “la Catedral”, to differentiate it from the old people’s home of the same name.

Nobody doubts that this stadium, which in one form or another has stood on this site for a hundred years, is “La Catedral” of football, and that is because of the sublime reputation of the local fans; a crowd that knows how to appreciate good football and applaud visiting teams and their players.

On more than one occasion, the Catalan player Xavi Hernández, for example, has been clapped off the pitch: "I am very grateful to the crowd at San Mames, they have always treated me very well there, and you get goose-bumps when they applaud you”.

The stadium stands on the former site of a chapel dedicated to Saint Mammes, who was thrown to the lions, which explains why the team’s players are referred to as “leones”.

The story also goes that when the chapel was demolished someone said: “They’re going to build a cathedral here.”

Athletic Club is like a religion for its fans, who are both knowledgeable and devoted. They follow their team wherever it plays, creating an unbeatable atmosphere at stadia all around the world. What’s more, they never ever turn on their team, or stop supporting it at each and every game.

The old stadium stood for a hundred years, undergoing a series of refurbishments through to 2013, when the new one was built, becoming one of the world’s finest football grounds.