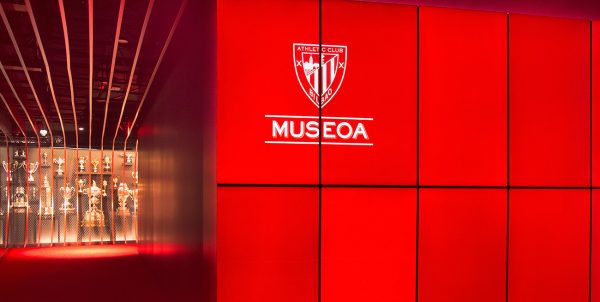 The range of tourist attractions in the Basque Country is growing. Amid this maelstrom of cultural attractions, there are six essential museums in Bilbao that you should not miss on your visit to the city. Let us tell you what they are.

The Guggenheim Museum Bilbao is one of the most renowned museums internationally and a cornerstone of tourist attractions in Biscay. It is also an icon of the new Bilbao. It is located in what was a dark, industrial and damaged landscape previously, full of port facilities which only defaced the environment. The political remedy to radically change that landscape was this fascinating museum of great architectural impact in the city. Since then, the Guggenheim Museum Bilbao has stood out as one of the most recognised contemporary art museums worldwide. The building, which was the work of the acclaimed Frank O. Gehry, is in itself a piece of art and is an example of the most avant-garde architecture of the twentieth century.

The new San Mamés stadium is in itself a must-see museum or place to visit for anyone coming to Bilbao. In 2015, it was awarded the best sports building in the world of new construction and has been rated a category 4 Elite Stadium by UEFA. Moreover, it's San Mames BAT  is a great alternative for those who want to watch a match from the best location with incredible amenities, which include a dining area with award-winning Michelin star chefs. However, San Mamés also houses the Athletic Club Museum. A museum that is a legacy of the previous one and that projects a greater impact, both visually and in terms of its services and equipment. The Athletic Club Museum in San Mamés is located on the corner linking the south and east stands. It is a historical museum that tells the past of the red-and-whites through items such as trophies, kits, graphic and audiovisual material, etc.

The Bilbao Fine Arts Museum is one of the major museums in the country. With more than 100 years of history and the collaboration of civil society, local artists and public institutions, the museum has managed to gather together a large number of works, which puts it among the most important collections in Spain. Currently, there are paintings, sculptures, drawings, prints and decorative arts, with over 6,000 works spanning an extensive chronology. It includes masterpieces of ancient art, classic art, modern art, contemporary art, Basque art and temporary exhibitions.

In the ancient district of Bilbao La Vieja stands the Museum of Artistic Reproductions, one of the best in Europe and the oldest in Bilbao. Located in a former church, it includes classics like the Parthenon Frieze, the Slaves and Moses by Michelangelo and the Venus de Milo, among others.

The Bilbao Maritime Museum is located in the old Eukalduna shipyards. It is a unique setting, full of history and the ideal spot for a museum of this nature. In its day, it was the Basque shipbuilding company, dedicated to building large vessels, that occupied this vast land area. In 1985, it was forced to close for the restructuring of the sector that had to be carried out as part of the agreement to join the European Union. Today, history has given way to this popular museum in Bilbao to disseminate the maritime heritage linked to the Estuary of Bilbao and its surroundings. For example, outside you can enjoy a display of several vessels, such as La Gabarra, a vessel on which Athletic Club celebrated its titles, naval ironwork and the famous Carola.

And lastly there is the Bilbao Archaeological Museum located in the Casco Viejo (the Old Quarter). It is the reference point and broadcaster of archaeological research in Biscay through its activities aimed at disseminating knowledge on the history of the region, promoting archaeological studies and ensuring the warehousing, conservation and restoration of archaeological materials. Its permanent exhibition takes you from the start of human life in this region, more than 100,000 years ago, up to other periods in history.

What you should not miss on your visit to Bilbao