Get to know the stadium

An international benchmark in the world of football.

San Mames stadium is located in Bilbao and is where Athletic Club plays its matches. It is a team with a unique philosophy and over 110 years of history.

The San Mames football ground is a benchmark worldwide, both for its architecture (considered the best sports building in the world) and the facilities available.

Listed by UEFA as Category 4, the San Mames stadium is a major milestone in the construction of large sporting facilities in the world, one of the benchmarks nationally and internationally.

It is one of the most modern architectural spaces in Bilbao, along with the Guggenheim Museum and the Iberdrola Tower, among others.

The inauguration of San Mames took place in 1913, alongside the location of the current stadium. One hundred years later, after hosting thousands of football matches, a new football stadium was built in 2013, where you can enjoy an incomparable environment, just like the old ground.

With a capacity for 53,000 spectators, San Mames now has all the amenities of a leading stadium in Europe.

San Mames is known as “the cathedral of football”.

Location of the ground

Located in an area next to the Bilbao estuary and the Olabeaga and Zorrozaurre districts, San Mames is not only a sports building, but also an architectural work designed to accommodate much more than football.

The strength and roundness of its construction looks out over the estuary in a privileged environment, but at the same time it shows order and respect for other nearby buildings, achieving a perfect symbiosis in this area of ​​the city.

San Mames is a ground which breathes football, but which has not only been designed as a simple sports arena. Its modern language, advanced image and the latest technology make the stadium a unique place and a reference point in Bilbao and the Basque Country.

The new San Mames stadium also stands out for its façade, as it has been possible to create a semi-transparent, permeable skin, presenting a recognisable visual image which is characteristic of the ground and gives it personality and character.

The stadium was selected by UEFA to host the 2020 European Championship.

The interior design of the ground reflects the spirit of the old San Mames by providing unique elements that correlate with the history of the club and the city.

The dimensions of the original pitch (105 x 68 metres) and the minimum distance required between the stands and the pitch have been kept, making it possible to create a “pressure effect”, which was also so characteristic of the old ground. In addition, the pitch is 7.8 metres below the ground level in the area, to reduce the overall height of the building and allow access to the lower tiers without any type of barrier. The grandstands were built with the maximum gradient within the parameters of comfort, linked to the stand with the playing area.

The ground was built by focussing on issues such as sustainability. Therefore, it was the first football ground in Europe to obtain LEED (Leadership in Energy and Environmental Design) sustainable building certification.

This recognition assesses the degree sustainability of a building based on multiple criteria, such as integration of the plot, energy and water savings, use of materials with a low environmental impact, innovation and design.

One of the biggest commitments of San Mames was carried out in the centre ring of the stadium. A space where design, history and tradition are on show. In addition to the close attention to detail and a modern, functional style, the centre ring has several areas equipped for enjoyment when matches are being played (cuisine with 9 Michelin stars) and a closed-circuit television system to make it an unforgettable experience.

A number of company events are held there and haute cuisine is enjoyed with internationally-renowned chefs during football matches. It is also possible to savour Biscayan cuisine in its tavern “La Campa de los Ingleses” and the “San Mames Jatetxea” restaurant, which are located in the stadium itself and open every day.

The San Mames VIP Area makes it possible to enjoy not only the football but also an unforgettable experience.

The ground also has other services such as a shopping area, event spaces, meeting rooms and conference rooms.

Unique architecture in the centre of Bilbao

San Mames Stadium has a characteristic, semitransparent, permeable façade, presenting an architectural work that stands out for its uniqueness and strengthens links with the city and the environment.

In addition, the new San Mames continues to maintain the spirit of the previous ground. Public pressure and the great atmosphere on match days are one of the hallmarks of this stadium, which everyone calls “the cathedral of football”.

Walking around Bilbao: the best routes on foot

Visiting Bilbao? 48 hours to learn about it 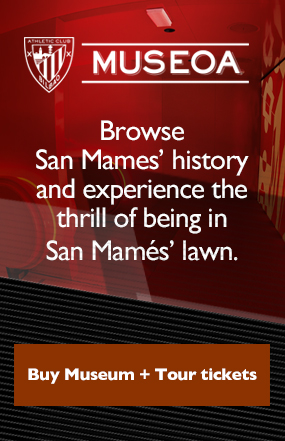